Atlanta Pops Orchestra and John Driskell Hopkins to Release Double Vinyl LP: In The Spirit: A Celebration of the Holidays Deluxe Edition

Atlanta Pops Orchestra and John Driskell Hopkins to Release Double Vinyl LP: In The Spirit: A Celebration of the Holidays Deluxe Edition

ADDITIONAL POPS HOLIDAY CONCERTS TO BE PERFORMED AROUND SOUTHEAST

ATLANTA, GA — This holiday season, the Atlanta Pops Orchestra and Zac Brown Band’s John Driskell Hopkins will reissue their beloved holiday album (2015) as a double vinyl LP — In The Spirit: A Celebration of the Holidays (Deluxe Edition). Featuring Hopkins and his signature baritone voice, the recording includes Christmas favorites — both new and old — with the Atlanta Pops Orchestra and some very special guests. For a sneak peek at one of the bonus tracks, “Mele Kalikimaka” with Hopkins featuring The Dappled Grays, watch the video here.

Tap into a beautiful and nostalgic world, complete with soaring arrangements, expansive harmonies, and even humor! Iconic friends Indigo Girls help to light up the classic “Do You Hear What I Hear?” while bluegrass trailblazers Balsam Range bring the Appalachian mountains into view on “What Child Is This?” and Laura Bell Bundy and Hopkins take “Baby, It’s Cold Outside” for a new spin. 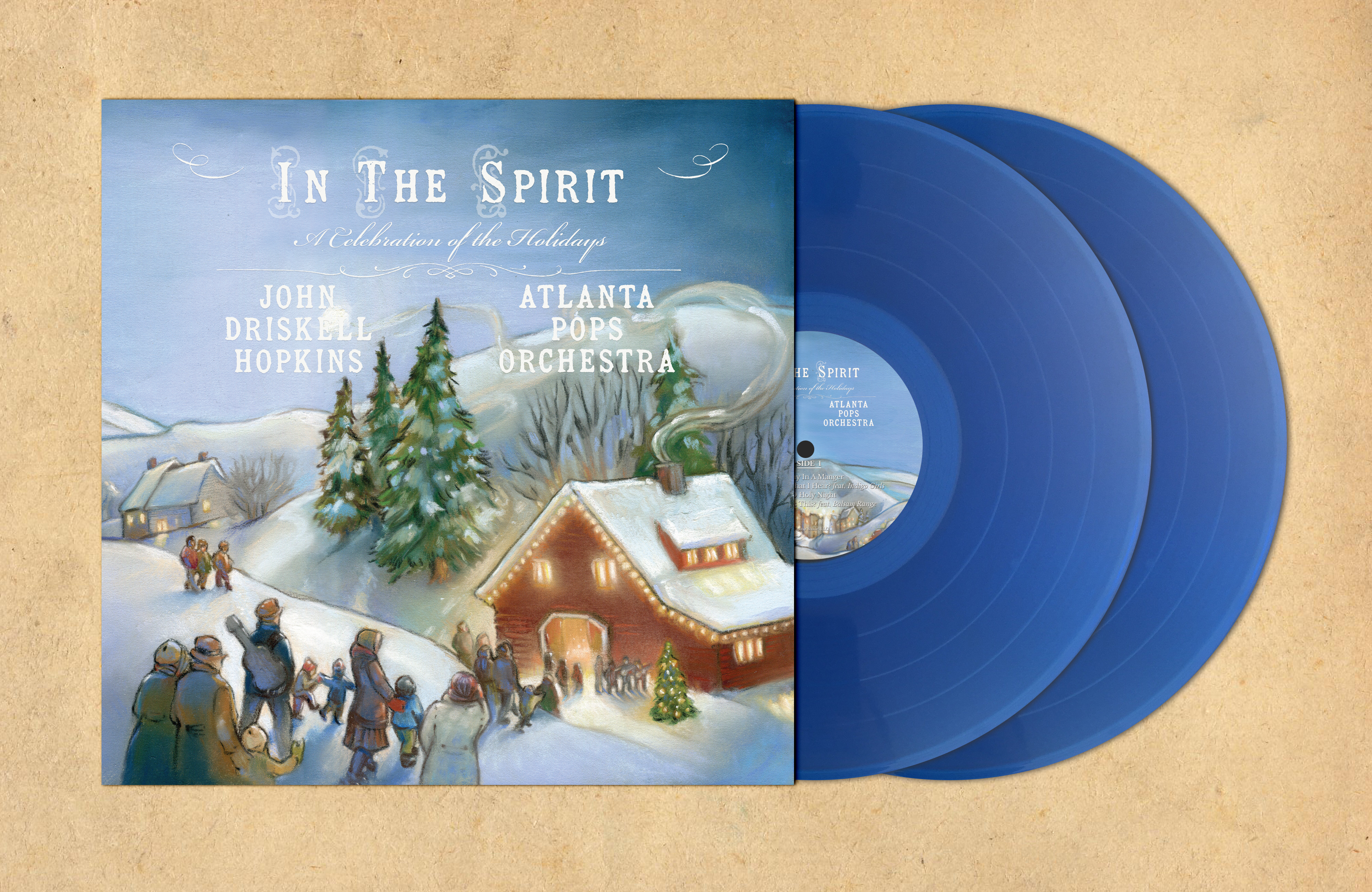 The new Deluxe Edition Double Vinyl LP of In The Spirit: A Celebration of the Holidays will be available for purchase beginning Friday, November 18, 2016, on ZacBrownBand.com. The four bonus bonus tracks — which include “Mele Kalikimaka” and “Angels We Have Heard On High” — will be also available for digital download via iTunes, Amazon and GooglePlay.

The original album, In The Spirit: A Celebration of the Holidays (2015), is currently available on CD at JohnDriskellHopkins.com, ZacBrownBand.com and AtlantaPops.com, and for digital download via iTunes, Amazon and GooglePlay. The CD and double vinyl LP will also be available at upcoming Atlanta Pops Orchestra performances.

In addition, the Atlanta Pops Orchestra will perform another season of holiday music around the region, including a Gala Concert at Callanwolde Fine Arts Center on Thursday, December 1, 2016, at 7:30 p.m., as part of its annual Christmas at Callanwolde, a spectacular Atlanta Christmas destination. Featured on the gala concert program, alongside the orchestra, will be John Driskell Hopkins (Zac Brown Band) and Michelle Malone (blues guitarist and vocalist), led by conductor Dr. Tom Gibson. Hopkins will sing various holiday classics with the orchestra — which are also featured on the Pops recording, In The Spirit: A Celebration of the Holidays —including “You’re A Mean One, Mr. Grinch,” “Have Yourself A Merry Little Christmas,” “Christmas Time Is Here,” and “O, Holy Night.” Malone will also sing holiday songs with the orchestra including “Count Your Blessings,” “Jingle Bells,” and one of her own original songs, “Feels like Christmas.” Opening the evening will be the traditional country guitar trio, the VaudeVillains.

Tickets for the Christmas at Callanwolde Holiday Gala can be purchased online at atlantapops.com/callanwolde.

This year, Callanwolde has partnered with Illuminating Design Inc. to transform the exterior grounds and gardens of the historic Candler Estate into a spectacular wonderland for a new Christmas at Callanwolde Light Show November 21–December 29, from 6–10:00 p.m. The always popular Designer Show House will return November 28 – December 13, from 11:00 a.m. –6:00 p.m., where visitors of all ages will enjoy touring the 27,000 square-foot historic Candler mansion which will be elaborately decorated with professional holiday displays, an expansive artist market and themed events for all ages and offering a variety of opportunities to celebrate the season with daily events.

The Atlanta Pops Orchestra is a premier provider of live orchestral music programming for the state of Georgia, the Southeastern U.S. and beyond. With a rich history spanning more than seven decades, the orchestra has captivated audiences throughout the world. Equally adept performing pop, jazz, folk, hip-hop, light classical, country and more, the Atlanta Pops challenges the expectation of what an orchestra is capable of delivering.

The Atlanta Pops Orchestra has released a number of recordings over the years, the most recent being 2015’s In The Spirit: A Celebration of the Holidays, a collaborative effort with John Driskell Hopkins — a founding member of three-time GRAMMY-winning and multi-platinum group, Zac Brown Band. The Christmas recording showcases a sound firmly rooted in tradition, but distinctively modern. Featuring new arrangements by Wes Funderburk, the album also includes guest appearances by singer Laura Bell Bundy, legendary folk duo Indigo Girls and award-winning bluegrass group Balsam Range. The album continues to be well-received by fans and critics alike, serving to showcase the versatility of the orchestra in the recording studio.

To mark the orchestra’s 70th anniversary, efforts were made in 2015 to reconnect to the vibrant energy of the present-day, collaborative Atlanta music scene. A two-night engagement at Oglethorpe University brought together a diverse group of Atlanta superstars representing the diverse sounds of the city. Guest artists included former Atlanta Symphony Orchestra and Henry Mancini trumpeter Cecil Welch, pianist Brent Runnels, blues guitarist Michelle Malone, hip-hop trailblazers Arrested Development, beatbox protégé HeaveN Beatbox, jazz trumpeter Joe Gransden, singer Chris Wright (performing a song written by Georgia Governor Nathan Deal), world-fusion duo Montana Skies and Americana singer-songwriter Levi Lowrey. Entitled Bringing Together the Past and the Present, the concerts have served as a springboard for the orchestra’s current-day endeavors. Under the direction of Conductor and Music Director Dr. Jason Altieri, the Atlanta Pops orchestra performs concerts throughout the Southeast for special events, performing arts center subscription series, concert associations, and colleges and universities. The orchestra also accompanies celebrity artists on tour and performs at national and international business conventions. Atlanta Pops Orchestra musicians perform as pit musicians for the Fabulous Fox Theatre Broadway Series as well as for other travelling productions, such as Celtic Woman, Trans-Siberian Orchestra and Mannheim Steamroller. Dr. Altieri also serves as Associate Conductor of the Reno (NV) Philharmonic and as Director of the Orchestra Program at The University of Nevada, Reno.

Callanwolde Fine Arts Center is a 501c3 non-profit organization whose mission is to preserve the historic Candler Estate and offer fine arts and outreach to the community. The Estate is listed on the National Register of Historic Places and was built in 1920 by the Candler family. Classes and workshops are offered for all ages in visual, literary and performing arts. Special performances, concerts, events gallery exhibits, outreach programs, rentals, and fundraising galas are presented and offered throughout the year.